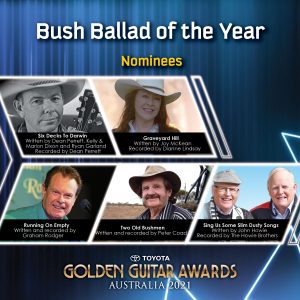 The 2021 Golden Guitar Finalists were announced this morning and Joy McKean has written 2 nominated songs!! Congratulations to Joy, Anne Kirkpatrick and Small Town Romance for ‘I Don’t Believe You’ (off the Slim & I Soundtrack) which is nominated for Vocal Collaboration of the Year. And to Joy and Dianne Lindsay for ‘Graveyard Hill’ […]

In support of the SLIM & I official documentary film (coming to cinemas September 10, 2020), we are pleased to announce the soundtrack will be released on September 4th, 2020. The soundtrack to SLIM & I, like the film, presents a refreshing approach to the story of Joy McKean and Slim Dusty. An eclectic mix […]